Tripawds Supporter sites have no ads!
Skip to content

Tripawds is a user-supported community. Thank you for your support!

It’s almost a month since Tibby’s left forelimb amputation on Tuesday, April 11, 2018. The oncologist at MedVet (the special veterinary hospital which performed the procedure) contacted us about a week after the surgery with final results of the post-operation biopsy. A localized, primary osteosarcoma was confirmed. In fact, the growth had caused a pathological fracture in her ulna, which likely had created trauma pain before the amputation, in addition to the cancer pain. No wonder poor Tibby had a pronounced limp before!

Tibby had been kept overnight at MedVet after the surgery for close monitoring. She ate her canned food well, and even had a bowel movement the morning after the procedure. I give her one Vet’s Best Hairball Remedy tablet every day. Its active ingredient is  psyllium seed, which essentially is fiber, so it stimulates peristalsis, inducing licked cat hair to pass through the intestines, rather then being vomited back up the esophagus.

Tibby had been receiving Buprenex 0.1 ml once to twice a day for a week before the amputation. After the procedure, the veterinarian recommended this be given every 8 hours around the clock. Luckily, my boyfriend was in between contracts, so we were able to administer Tibby’s pain medication consistently. Also, twice daily Clavamox 1 ml was given to prevent any infection. Our only problem was administering one-half of a tablet of Pepcid every twelve hours to prevent indigestion, because Tibby wouldn’t swallow it despite our best attempts, and she also refused to eat the Pepcid crushed into her canned food. We gave up on the Pepcid, since Tibby ate well (about one-third to one-half of a can of food every 8 hours) without any vomiting.

At home, we set up a small 2’ by 3’ crate for her recovery. It was covered with dark blankets to provide a restful environment, and the bottom was lined with her favorite fleece throw. To keep our two small dogs in our tiny apartment away from our recovering cat, the crate and litter box were partitioned off by a 30 inches tall by 24 inches wide pet pen. Instead of having to wear an E-collar, Tibby wore a small dog shirt. Initially, per veterinarian’s recommendation, we used Yesterday’s News paper litter. However, since her shirt covered her incision thoroughly, we switched back to her regular clumping litter. Immediately, Tibby was urinating and pooping more with her old familiar litter.

For the first week after amputation, the routine was 1) offer her food and water, and 2) administer medications as soon as possible after her meal. Narcotics and antibiotics are famous for causing nausea, so it’s best never to give them on an empty stomach. This regime worked, because she usually ate two or three times a day. Before surgery, Tibby weighed 10.4 pounds. Today, she is at 9.6 pounds, and the veterinarian said this is an acceptable weight for an indoor, Domestic Shorthair, 14 year old cat.

She slept A LOT during that first week after the operation. Tibby would naturally be a bit more active at night. On the second week, we started reducing her Buprenex from three to two times a day, and her alertness increased.


To remove ads from your site and others, upgrade to a Tripawds Supporter blog! 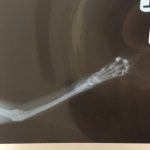 Tripawds is a user-supported community. Thank you for your support!

My 14-year-old Domestic Shorthair Cat named Thibodeaux, aka Tibby, began limping noticeably towards the end of March. I noticed that the joint on her lower left forelimb appeared somewhat swollen and tender to touch. She jumped up and down onto the kitchen table to eat her canned food, since we kept it up there to prevent our two small dogs from devouring it, so I presumed Tibby had an injury. Unfortunately, our local veterinarian found that the X-rays showed bone cancer.

A consultation to an oncologist was recommended, and we proceeded immediately. A fine needle aspiration of the growth was performed, which further confirmed the bone cancer. Chest x-rays revealed, much to my relief, that the cancer was localized to the left forelimb, and it had spread to the rest of Tibby’s body. However, a heart murmur and cervical spine narrowing was discovered. The oncologist said that Tibby was still a good candidate for amputation, with a post-operative good quality of life estimated to 2-4 years. An echocardiogram of the heart was performed before the operation, showing mild hypertrophic cardiomyopathy, which helped to tailor her specific needs for anesthesia and monitoring during the amputation procedure.

Tibby was kept nothing to eat or drink the night before her surgery. We brought her into the specialty veterinary hospital on Tuesday, April 10 at 7am. Around noon on that day, we received a called from the surgeon, informing us that Tibby had done well and that she would be kept overnight for close monitoring. The next morning, we were instructed to come bring Tibby home, because she had recovered wonderfully after the surgery, eating, drinking, and voiding – even had a bowel movement!

Add an excerpt to your posts to provide a summary for readers in many blog themes!

Read this for important information!

Welcome to Tripawds. Please read on for important tips. This is your first post. Edit or delete it, then start blogging. Don’t miss our helpful WordPress tutorial videos if you need help getting started with your new Tripawds blog.

Tripawds Blogs shall NOT be used for commercial OR fundraising purposes.

The free Tripawds Blogs platform shall not be used by an commercial entity. Any blog created by a veterinary clinic, product manufacturer or any other commercial endeavor will be deleted and all users removed without warning. Please contact Tripawds regarding guest article submission opportunities.

Direct appeals for financial assistance to help cover care expenses will be deleted without notice. Everypawdy in the Tripawds community faces their own share of high expenses related to surgery, recovery and care. Veterinary financial aid resources can be found in the Tripawds News blog. Please see the Tripawds Fundraising Appeals Policy for more information. Thank you for your understanding.

Please publish a new post (or edit this one) to share your story. The Tripawds community is only notified of new blog posts in the Recent Posts widgets found throughout the News blog and discussion forum pages. Members will not be notified of any comments made on this default first post. You can also choose to edit or delete your sample page.

Publish a blog post or your site may be deleted!

Please be sure to publish at least one blog post to let us know you that you may use your blog. NOTE: Failure to do so may result in your site being deleted. If you upload photos to your Media Library, but fail to publish a post, we’ll never know they are there and they may be gone forever!

Another way to ensure your site does not get deleted, is to upgrade it with a Tripawds Supporter subscription.

By default your site will be indexed so Tripawds members will be notified of your update in the Recent Posts lists throughout this community. If you change your Privacy settings to discourage search engines, your posts will not be indexed!

To limit the amount of spam you receive, any first comment a reader makes on your blog will require moderation. Be sure to “Spam” any inappropriate comments, and approve those from your readers so their future comments appear immediately. You can change your comment options from the Settings -> Discussion tab in your dashboard.

Thank you for sharing your story, and happy blogging!

About Your Tripawds Blog:

New Tripawds Bloggers: Please review your default first blog post at left for lots of helpful links for getting started with your blog or review the Help Videos in your dashboard. Edit these widgets from your Appearance settings to remove this notice, upload a custom header photo, or choose from 130+ themes, and much more!


Tripawds Supporter sites have no ads!